7 Days To Die doesn’t come with much of a guide, and their Wiki is usually outdated. However, at the Age Of Oblivion, we hope to give you the best guides, up to date Wiki and a very extensive FAQ page to help you with any confusion. Below is our most commonly asked questions. If you have a question that isn’t here, feel free to ask in our discord.

Do not put any content here. It is hidden by default.

What are the minimum system requirements?

I don't meet the minimum requirements, can I still play or host a server?

It depends on your system. If you just barely don’t meet it, like say an older dual core CPU, you can certainly try.

The mod has a lot of new stuff it adds to the game, so it requires a good amount of RAM. The base game runs best with a dedicated graphics card with dedicated VRAM. If you have 16GB of RAM, with an onboard GPU in the CPU that is sharing that 16GB, you will probably crash trying to load the game.

For example, my system (Zami’s) has the following and can run the mod on medium graphics with some hiccups when zombies spawn in as I enter populated areas. My system is at the lower limit of what can run the mod okayish and I am consistently running at 11-12GB of RAM used and my VRAM is at 99% while playing.

The biggest thing on a server is the CPU. If you are trying to run a server on a 10+ year old home computer, it might work but it might not. This isn’t a NAS that only requires a small CPU to do file requests. The game itself is hard on a CPU, having to do it across large areas of the map as people wander around and aren’t near each other, or even have bloodmoons spread across the map, will kill any CPU not recent enough to handle that kind of pressure. Hosted dedicated servers usually have very beefy CPU setups, so you should be fine if you are renting a host.

Otherwise, you need RAM. Unlike vanilla, the mod adds many more wandering creatures. These all get loaded into RAM on server startup. The bigger the map, the more RAM you’ll need. Especially if you have players spread across the map as each area has to stay loaded in memory when players are in those areas. So if you have a bunch of players, you’ll need more RAM to compensate should they decide to all go to the corners of the map at the same time. So you can get away with 16GB of RAM if it is 2-3 people and they typically travel as a group half the time. We say 24GB simply because most servers are designed to host 10+ people at a time when they are online and public, but 32GB is optimal if you plan on having a large public server.

Where can I download the latest version of the mod?

Things don't look right, I still have the vanilla display.

Then you haven’t installed the mod completely. There are a lot of mods in Age of Oblivion. It is best to delete all your mods from the game, including any prefabs added by those mods, and start over. You will lose any save game this way but it is for the best.

If you don’t know what prefabs were added, remove the mods folder and then verify your game files through Steam, then let it remove any files that don’t match.

YOU SAY TO BACKUP MY SAVE GAME(S), WHERE IS THAT?

It is in your AppData folder under Roaming. This is for BOTH a server setup and a user setup on Windows. It should be in this location. C:UsersyourusernameAppDataRoaming7 Days to DieSaves. The saves are in their game world folders, not by your game names.

Here is a picture of where it is located in the window on the right. You can ignore the 7zip and other windows in the picture: 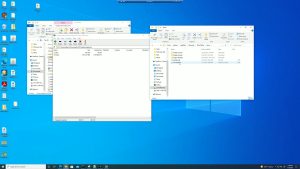 Help! Something invisible is hitting me!

It sounds like you updated from a previous version of the mod and didn’t remove all the files before updating. The mod is still in Alpha stages and things get tried and removed later when it doesn’t work out for various reasons.

Make sure you follow the upgrade steps exactly. This includes removing all mod files previously installed before adding the upgraded mod files.

I don't like the UI, can we change it for our tastes?

No, the UI is set up in the mod files to look how it is and cannot be easily personalized. It is not fully done but is much better than the original. If you have suggestions, drop them in the AOO Discord.

I can't connect to an AOO server! There are tons of red errors!

Both the server and the player must have matching mod files installed. Problems with having mismatched files include:

It has come to the development team attention that ModLauncher is not properly updating all the files. In particular, it is not deleting files that were removed. This can still happen with improperly set updates manually if files were deleted before the update was applied.

It is recommended when you update to remove all mod files, both player and server, then install the updated mod files fresh.

I cannot find how to make the Workbench or Chemistry Station!

I am taking damage above and below this skull in the ground!

It is intentional that if you enter a skull chamber (unlock the skull with a skull key) to start taking damage. This is to keep players from camping out in the POI. You will need to plan ahead with healing items to survive any trip into a skull chamber.

While it isn’t intentional to have the damage buff go above ground, it does happen occasionally. Usually this is right over a skull chamber or very close to it. You won’t always have it above ground, but leaks do happen. Don’t loiter around the skulls.

I have a quest to find a "secret trader" but there is no marker to find them!

That is correct. They are secret for a reason. Look for a trader sign buried in the ground, or even a hatch. They can be easy to miss as the entrance is at your feet.